It's been about three months since my last incomprehensible ramblings, and about a week since I've had to provide tech support (Whoo! Spring Break! Everybody pull down your pants and riot!)


Between talk of doubling our iPad deployment, adding a new lab, seizing control of the school newspaper offices and a ground war in Asia our ARD install, I've barely been able to wrap my head around my last After Effects project, much less get much done on the Joe front.

Add in Wave 4 finally hitting in decent numbers (ask me about army-building Airtights...) and for that matter having to go 30 miles afield to get a Zombie-Viper and I was chomping at the bit to get some WIP fleshed out, and maybe even begin painting again.

Destro : I'm a big fan of Destro. Not only is he a suave motherfucker with a personal army, he's the guy who brought wrist-rockets to a gun fight. Cobra has a wide assortment of weaselly schemers and brutes, but Destro is the guy who can build a Weather Dominator and stomp you into a crack.

I wanted to use a Night Adder to make Destro v10/ Crime Boss Destro, but thought it just looked too plain. So I took a spare Destro, hollowed out his gauntlets, drilled a small hole to mount his collar and added a res Destro head. I'm going to switch the holster to the left, because why use your wrist-rocket hand to draw a pistol? 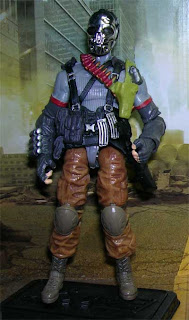 Skullbuster : I like guys who are the toughest "*", due to my love of hyperbole. The Range-Vipers are kind of like weaponized hobos (says the guy who always polices the bodies/ scavenges the ammo), but Skullbuster is the most famous reindeer of all. Or something. Imagine Cobra recruited Bear Grylls.

I actually plan on casting the skull-head, since I think it would make a good replacement for the skull-brain helmets.

Topside : Since the Club FSS seems to be dosed with Compound Z at the moment, I thought I'd try and whip up a Topside.

Wild Weasel : I just added Shock trooper goggles in place of the visor. No big whoop.

Outback : Man, those oddly proportioned legs on the 25th bugged me. I picked up a spare Tunnel Rat since I thought his colors matched Crankcase. When I looked at his shirt, I thought "Survival"

Tunnel Rat with Stalker lower legs and gear. Need to dig up my dry transfer sheets.

Static Line : Part of the fun of new versions of old guys means getting to make the repaints.  Thanks to Strato-Viper, Nitro/Motor-Viper, Slipstream, Skydive and Lift-Ticket, most of Sky Patrol is a new head and a paintjob away.

Whither Static-Line? There's no modern-era Backstop, except for LeeMarvin80's custom (where I took the charbroil armor from).

Used a res. Cobra Trooper, with ren. Ripcord's legs and head. A little off-white on the waist and forearms and I'm golden. 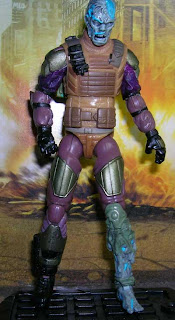 Toxo-Viper v2/ Toxo-Zombie : I know, my reputation as the Byronic Man is in jeopardy if I enjoy something popular (and despite my dismissal of Zombie movies as a socially acceptable vent for the desire to kill everyone around you. I actually like Return of the Living Dead though, since I think it's one the most realistic depictions of Something Really Bad No-one is Prepared For. C.A.T. loved to talk about it when we had duty together.)

Anyway, I tried to figure out a base that would do double duty. Dusty/Ren. Trooper torso, Air-Viper Commando/Swamp Viper limbs, switched for Zombie-Viper parts as necessary. I think for the Toxo-Zombies I'll keep the light purple since their outfits are sorta bleached out from the Plasmatox. If you could see the back, it would have Airtight's blue tank on it.