G.I. Joe customs: Space is the place (to punch Destro in the face)

Finally pulling myself into corporeal form after weeks of twelve hour days and most of my department flitting off to conferences this last week. The hardest part was one of the kids deciding to set the audio to Dubstep one day (the latest incarnation of the shitty music kids listen to because the adults hate it). Not to say I'm an adult, but frankly, I lurve Tokyo-style Speedcore, but I wouldn't expect other people to, or put it on at work.

Speaking of hating music, Rory doesn't read this, so I can put on some Sun-Ra:

(I know, but I like the chorus on Nuclear War more. )

Astro-Viper (wip) :  The Cobranaut holds a special place for me. On Spring Break that year, I saw one on the peg at Eckerd Drugs. I had stopped collecting GI Joes after the movie, but the thought of a Cobra Astronaut hit my sweet spot. I didn't buy another Joe until the 1997 Cobra Command Team.

The leg armor is vaguely remembered from an Ares article on combat astronauts for Top Secret.

Like I said, the Temple Snakes eyes is a great bundle of parts.

Countdown (wip) : Whereas Payload is a more realistic looking astronaut (at least, he looks like he'd fit in Alien), Countdown looks more Flash Gordon. And that's alright by me.

I'd like to turn up an original Countdown helmet, which is a sweet piece of work. 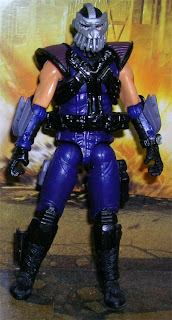 Dice : I've been looking a Dice customs trying to decide on a decent secondary, and these two persuaded me the Storm Shadow/Red Ninja harness was the way to go.

edit : I'm not the only one thinking that harness.

Iron Grenadier Trainer Roddy Piper (wip) :  I watched a lot of Wrasslin as a kid, (also Rock n' Wrestling) and I earnestly want to thank whoever decided the Rowdy One was Sgt. Slaughter's opposite number and working for Destro.

I've got to finish dremelling out the space for the neckball,  so his head should set a little further down. I went the opposite of Sgt. Humpty, and used the IG legs. 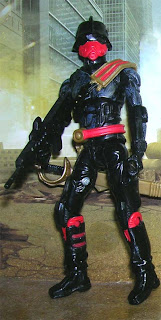 Iron Grenadier (wip) : When the 25th IGs came out, I couldn't get behind the Battle Armor CC body. I cannot for the life of me find out who did it, but someone made a custom using the Reactive Armor body, and that's what got me.

I'm using the Tavor TAR-21, which the IGs used in the Spy Troops/Valor vs. Venom era. I may paint some more red patches on it.

Overkill : Cyborg who wants to destroy organic life? How could I not like this guy? Watched the VvV movie, where GI Joe fight werewolves (again), and came away digging Overkill more than in Sigma 6.

I have to credit General Hawk for the head (I've got to dryrush it a little, since he's looking a little Mr. Beef.) I took a little nail polish remover to the black part of the RoC CC torso. Badab Black and Chestnut wash, cleaned up with Isoprophyl alcohol. 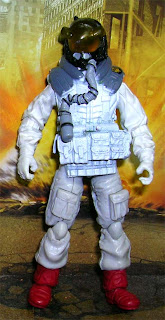 Payload (wip) : Never having the Defiant as a kid, I only remember him from the Marvel appearances (so I was surprised to find out he was white as a toy.)

I've seen JpnX's Astronaut, and I liked the Snow Serpent legs. Mostly, it's a matter of finding a use for the Skydive gear. I've got to work up the snuff to cut off that re-breather.

Skymate (wip) : The glider pilots are obscure dudes, and therefore at the top of my to do list.

I'm not sure what to do about the hat/headgear, except not make it hot pink.