Someone must have talked with the packing department (the complaint I've heard most often online is "Mai produkt not mint case fresh A bloo bloo bloo would not do busnizz aga1n"), since it was tightly packed with crushed Kraft paper. Delicious, Minty Fresh. It lasted a minute after this picture was taken.

I'm happy to see her weed-whacker has a nice modern M4-style stock, and her dagger looks like new tooling (I think the only old tooling is Resolute Scarlett/Helix lower legs, and Ripper's rifle.) I'll have to fab up an appropriate backpack. After looking at her upper arms, I regret not getting the variant for fodder, since they'd be spot on for a Ninja Force Scarlett.

Zarana : I just added the red shoulder holster from PP Copperhead, with the side strap cut off. A Reso Trooper backpack is filling in for her backpack.

May paint up a Beachhead pack, and once I dig up MU Storm's vest, I'll try it out. 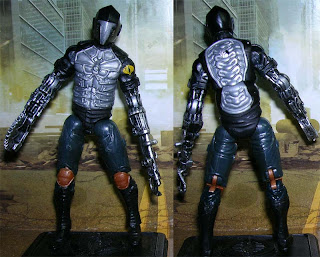 BAT v4 :  Did a little painting again, to touch up some RIT dye. Had just about enough to block out the torso on this guy. Still have to dig out the Air Viper from the RoC Night Raven for those lower legs. Man, I dislike paint rub. 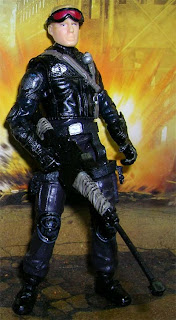 Blackout : Relented on the funky arm armor, after I realized the Elite Viper arms would work with some dying.

I favor dying when I can, since it colors the swivels and joints, effectively cutting down the paint rub. I'm sure it sounds weird for a guy with a painting degree to bitch about painting, but I don't have arm swivels on masonite. Sanding down joints, top-coat, such a pain.

I admit, I've not tried Future or superglue as coats, but I've had them recommended. I've also had better bite from Model Master Acryl brush-on primer (4680), than the spray primers I used before. 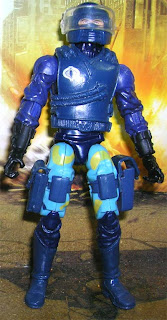 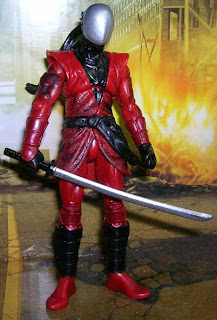 Slice : A while back, I made a Slice from a MU Hand Ninja, MU Ms. Marvel sash, and a head made from Cobra Commander's head, some screen, and greenstuff. I'm waiting for the new Storm Shadow to start redoing the ninjas, but I still like the height on this guy.

Mask courtesy of Temple etc. Snake-Eyes, who is a great bundle of parts (not such a great figure).

Swamp-Viper : When the early shots of the Desert Extreme Environment Pack came out, one of the figures was a Croc Master with an AVAC head, Battle Armor Cobra Commander's backpack, and the sword and three-section staff from Snake-Eyes v34. Wow.

Having seen that majesty, I was a little disappointed by the Swamp-Viper we got from the Sting Raider set. He still had a swag paintjob, though. The arms got a black RIT bath. I may dip the helmet later, since it looks much too clean, now. Badab Black for the wash.