GI joe Customs: A message from the Action Man

I admit, the need for world-building I used to release through RPGs has mostly been channeled into G.I. Joes. From reading Joe related fora, everyone seems to have a "Joe-verse". Post-apocalyptic, near future, retro, no ninjas, Tier-1 Operators only, everything goes.

I'm apparently one of the few people who embraces Sunbow and Comic and Toy versions of GI Joe (I'm a little hazy on DiC, though.) It makes an odd time deciding who I want to have figures of, though.

I'm definitely waiting on that new Kwinn figure (the last one was one of the few I got during my Joe fast), and there's finally a Dr. Monev Venom figure. But there's so many one off characters, I'm not sure where to start sometimes. (Although when I see someone make a Bongo the Balloon Bear, it's heartening to me.)

For that matter, there's the White Clown, who bears a striking resemblance to the Thin White Duke:

Action Man : Action Man was the British GI Joe, and I found out about this when catching the version 2 Animated series (Where he had probability vision, seeing mathematical formula over everything. Take that, Helix and Amadeus Cho.)

Around this time, Action Man took over for Tracker in a TRU Night Force 6 pack. (Head on over to Joe Declassified, and read the story in Issue #1.)

Why the Daniel Craig head? They released a series of Action Man figures dressed as James Bond, so it seemed a good choice. As for Ice Storm, as much as I like new Joe characters, I can pop the head off a Frankenstein and not break a sweat. 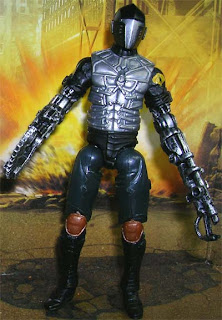 I was looking at the Air-Viper legs, and though about how spindly they were, and it followed from there to the insectile legs on the v4s. Had to sand the shoulder discs down a bit. I'd like to find a weirder looking head, more Ultron or Briareos. 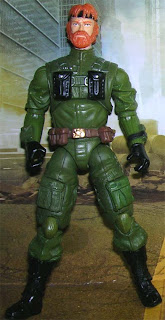 Big Bear : The Oktober Guard is one of my favorite factions in GI Joe. (Daina doesn't look like Jackie O would be a tenet in my Verse.)

It took a while for the proper Oktober Guard to get toys, but Red Star (who seems to be a bizarro Colonel Brekhov now) and Big Bear held the pass until they got there. He does occupy Horrorshow's ecological niche, but I'm fine with two green guys who wreck tanks. I'll have to sculpt an ushanka, but I think Outback's head will do a yeoman job. 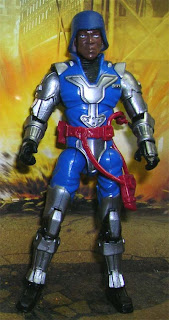 Lt. Clay Moore : So in the Sunbow episode "The Traitor", Dusty runs afoul of Clay Moore (even in the Arena of Sport!), who ends up rescuing Cobra Commander in the end. In 2007, the GI Joe Collectors Club made a figure of him promoted to Shock Viper Commander.

This encapsulates the world building I'm shooting for, and I applaud the club for it. I plan on using the Armored CC body for regular Shock Troopers once I get a head kitted out. 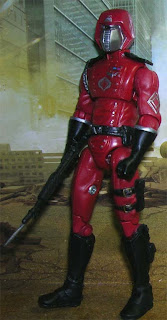 Crimson Guard : So, in the Sunbow cartoon, the CGs wore gloves. Little things like that bug me. (I suppose you could make a CG Leonard Michaels with a little white paint. I don't think I'm a big enough "Operation Dragonfire" fan to do it.)

Tracker : Once upon a time, it was a right of passage for a Joe customizer to take a Tracker, and make him look less like a Football themed hot dog cart.

I'm planning on making the shirt olive drab, like the Night Force version (you did read that Joe Declassified issue, right?), but leaving the pants black.