G.I. Joe customs : Got to get tough

Metalhead :  I mostly remember him from the time he played mid-boss at the battle of Benzeen, but he seems most notable for being a spaz in the DiC cartoon.

I prefer the v2/v3 body, but I wanted a v1 styled head. I had started shaving down a Ripper head, but I had a James McCullen IX sitting around, so I shaved part of the mustache, and added some greenstuff.

I may repaint the gauntlet gold so it blends in better. I didn't dig the grey on the v3, so I made the leg armor gold.

Tracker (unproduced Night Force version) : Actually painted, trimmed down the cheeks from the Cyclops head. May paint the visor yellow like the DiC version, since the red sort of drops out against the black. 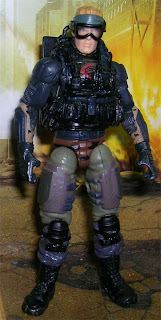 Mirage : GI Joe's Bio-Artillery/Rocket-Fire/Weapons Expert. I saw someone use the Recondo lower legs making him, and I had a Jungle Duke with a bandana, and everything went together. I plan to make my Repeater more Colonial Marine, so I figured I had to make a Mega Marine to hang with him. 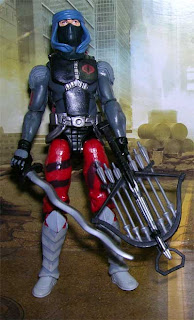 Night Creeper :  Like the Range Vipers, the Night Creepers are great army builders that aren't easy to army-build. I've got a few CS Snake-Eyes whose legs I've swiped for Sand Vipers, and I dig the wv3 Storm Shadow (except for that spring-loaded torso).