In my war against paint-rub, I've been trying vinyl dyes. Rustoleum Gloss Blue and Dupli-color Desert Sand vinyl coating, to be precise. The main difference is solvent, the coating using Toluene and the dye using Acetone, the troll of solvents.

Most of the articles I've read online recommend the dye and not the coating, but the joints that rubbed off were from the dye, while the coating stayed intact. I've had good luck with Rit dyeing, so I might just dye the swivels and see how it looks.

WiP note: Why not finish painting these guys before putting them up? Mostly because everytime I photograph something, I notice what I've got to touch-up...

Double Clutch : My disappointment with the PoC VAMP was with the baffling Clutch/Double Clutch (The brown Lamprey/Snow Job parts are otherwise great for one specific reason.) I never had a VAMP mk2, but in most of the Sunbow series, Clutch used his v2 outfit, so I really wanted one.

The Duke 43 arms are great short-sleeve arms, something the 25th/ME figures came up short on.

Scrap Iron : I credit Alexx Shorts for the thought of "PoC" Scrap Iron. I had some left-overs from a trade where the other guy wanted a Destro with the Iron Grenadier armor, and I grabbed another Iron Grenadier and an Arctic Destro and behold. For a character I've described as a jerk, I've made a few Scrap-Irons...

Desert Range Viper (Operation M.O.T.H.) : The Range-Viper is such a great figure, but it's pretty hard to army-build him. I do have a couple RoC Fireflies and spare Resolute Troopers (congratulations on making a trooper I don't care to army-build, Hasbro), and I don't mind an Alley-Viper with different lowers, but I do have to make another helmet for this guy. 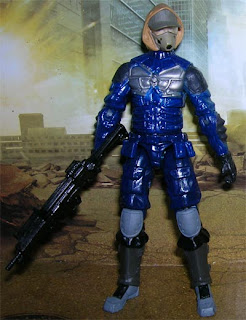 Sand-Viper : Of all the JvC/Spy Troops molds, the Sand-Viper is the one I'd most like to see a new version of. I thought the Dusty mask was a good fit for the Sand-Viper muzzle, and I've got the parts to whip up a v5, v4 (with the wv5 CoCo torso) and a v2.