Winter is a drought period as far as customizing goes, since I don't have a well-ventilated place to paint. I've also been feeling generally wretched, until a wonderful vacation after the semester ended at Jeff's place. Also, I've felt sort of off about running my blog updates in my friend's Buzz feed, since I want to talk GI Joe, and no-one I know could give a rat's ass on the topic. So, I've stopped syndicating it to my Buzz, and I feel better for it.

Anyway, I've got a pile of guys on my bench, in assorted states of Frankensteining, so I'll start with the decently finished ones, and start on the WiPs and half-painted ones later. 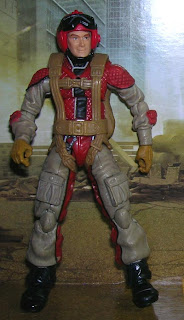 Crazylegs: Everyone's problem seems to be the Sandstorm head, and the Snow Serpent legs. When I was putting him together in my head, I thought Copperhead legs would be the way to go, but no way do I want to try and color-match that French Grey he's painted in. Maybe I'll make a Night Force version sometime.

Python Patrol Copperhead: After seeing a Resolute Copperhead, I decided I had to make a more imposing looking Copperhead. Originally, I went with a Sgt. Stone torso, and Copperhead legs, and a spare Shadow Tracker vest (spare since the first one I got was missing the knife sheath, Bazooka Trooper style.)

Then I decided to do some Python Patrol customs, and I swapped to the PP Copperhead body, and covered up that awful Roadblock torso. 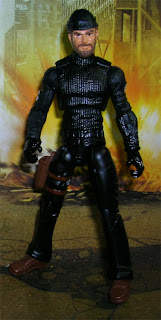 Shipwreck: Shipwreck v5 was one of the few Joes I bought during my Joe hiatus (89-07). Somehow the Commando sweater and bell-bottoms worked for me, and after not getting the same satisfaction from the RoC one, I hunted down a spare Snake-Eyes to do this up. Possibly the laziest of Lazy Bastard Customs.

(Yes, I tried 5-pk Shipwreck/Storm Rider legs, but they're meant for wider hips. Also tried the Steel Brigade torso for the color match, but didn't like the arms. May add the fake turtleneck collar, though.) 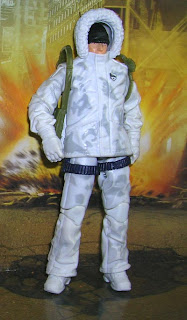