The Dungeon of Doom: A Buttal

I know you've been waiting for more Bandit Kingdoms reminiscence, but Jeff's re-posting a link to his Notable Features of the Dungeon of Doom article reminded me I never made a proper response to it. I'm not writing it as a rebuttal (It's too negative in connotation, although a broader definition includes clarifying points and telling your side, most people think of the legal overtones), it's just at the time, I only had access to a shared computer, and not the time to write a lengthy reply. Jeff has commented on my memory for these things, and I concur it's much easier for me to remember something a decade ago than yesterday, so bear with me. (Can anyone tell I enjoy the writings of Edward Bulwer-Lytton?)

Level One of the dungeon had a 10' x 10' room that was actually an automatic express elevator down to level 4. Once down there the elevator didn't come back up for six hours. In its first inadvertent use I described the sound of the elevator operation as "chunga-chunga-chunga". The players grew to associate that sound with deadly peril. I don't think any of my players ever discovered the Lower Hellevator, which led from level six to level ten.

The first time we encountered the Hellevator, the door opened and a Vulchling ran out screaming. That was enough to get us interested. The closest thing to control was you could make a saving roll (I can't recall a target number), to get it to stop. So our encounter became "chunga-chunga-chunga", "make a saving roll", clatter, "nope",  "chunga-chunga-chunga". When we opened the doors, we had no damn idea where we were, but we were getting back up the stairs as fast as possible. Eventually, as we cleared more of the dungeon, it became a convenience to get further down without making wondering monster checks. We adjusted fast to horror.

This campaign was the first time most of the players in my group ever found a sub-level. Of course they did it the hard way. After a bad go on level three they were desperate to get out of the dungeon. The PCs rejoiced when they found a new staircase that went up a level. Hours later they finally figured out that this particular level two had no access to level one. Exhausted and lost, they were forced to make camp on an uncleared level. They survived a night in the dungeon only by sharing a room with a large band of gnomes that showed up on the wandering monster charts.

Jim, as I've mentioned, became a survival machine once he was separated from the party. In a fight, he was just as likely to cast Feather Fall on an enemy as Magic Missile. In this paragraph, substitute Jim for Party. In short, I left him to die, and he made friends with the Smurfs. 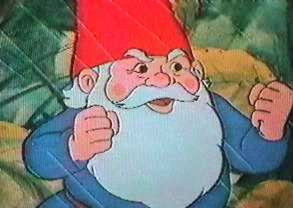 David the Gnome has had enough of my shit.
After visiting the humble Gnome village, hidden in a cave, Jim announced his plan to further the works of St. Cuthbert by using the gnomes to clear the Bandit Kingdoms of the human infestation. Now,

I later returned in the night to Fireball them, then close the entrance to the cave with Stoneshape. I had to burn the village to save it.

Instead of the standard pirate booty box, about one treasure chest in six was a hollow iron statue of a frog with a hinged mouth. No particular reason. I just like frogs. The players were mystified.

The hidden room where we first found the frogs was also the only safe place to hole up in the dungeon. Many a night, we spiked the doors, and wondered whether we trapped ourselves in there with Frog Golems.

The Chapel of Evil

Not far from the Hellevator exit on level 4 was the Chapel of Evil, a little subsection of the level kinda like the Shrine of Evil Chaos in module B2. The big difference: the head cleric was a vampire. After a rough initial encounter with the Vampire Evil High Priest and his minions the party withdrew. They came back with more henchmen (including an ogre trained in the art of sumo who was also an expert with the harpoon, IIRC) and more one-shot magic and wasted the place in an epic battle. Good times.

Ray took a trip in the Hellevator, which ended at Level 5. Wounded, he tried to find succor at Dracula's Lil' Chapel of Evil ('cause, he's Ray, and he's awesome like that), and after that battle, he barricaded himself in a room. With two Werewolves. Which worked as well as you'd think.

This level was mostly cleared by our Special Guest Stars. Chris, from Jeff's High School group, came in to play a Druid, because they can Cast Bears. In short order, we defeated Dracula's supply train, murdered a tribe of Ogres and recruited their leader, who went on to stab Dracula while I slow roasted his Cleric, and the bears killed everything else. Also, Tasha the thief got away, later to return as my Lieutenant and commander of my bandits.  Sexy, Sexy Commander.

The Druid casts Wall of Bears
After Ray died, and we skirmished with Dracula's ground troops, I hit the lair of a young Red Dragon. Within a couple of rounds, I was fighting a holding action, and as soon as Doc died, Thom knocked on the door,  with his monk and dice-bag. After hearing the sitrep, he asked "Can I enter play?" and proceeded to beat the Dragon to death with his kung-fu, used part of the horde to Resurrect Doc and my henchman, Sam. Thom couldn't play again for a couple of years, and came back as a priest of Pyraray, who was a double agent for Tharizdun. Tharizdun owes me 25,000gp and a new temple.

Also, the Ogre Sumai (Ragon of Suubak) came later in the campaign. This one was all Grunty.

No player ever discovered this secret, but the dungeon had an off switch. According to my sketchy notes for the bottom level (nothing below level 8 ever had a proper key and map) the lynchpin of the dungeon was the legendary White Stone of MWOWM, which I totally stole from the Book of the Subgenius (or maybe its sequel, Revelation X). The evil vibrations from this artifact were what drew so many demons, devils, undead, etc. to the dungeon. If the White Stone were removed from the dungeon most of those monsters would leave and eventually only a mindless slimes and vermin would remain to haunt the rooms and passageways. I always imagined that if the players got their hands on the Stone they would try to give it to the elves without them knowing what it was. They were that kind of group.

I guess it should be clarified. The Elves were dicks, so fuck them. Seriously, we teamed up with the Drow, because they were more palatable.

On level seven there was a deep pit that led to the level ten lair of a Pit Fiend. Because I am that literal-minded sometimes.

The one room, other than the Gynosphinx's waiting room, that was quiet contained a room with what appeared to be a well. Looking down the well resulted in "A Sulfurous smell, deep laughter, and distant pair of red eyes looking up at you". 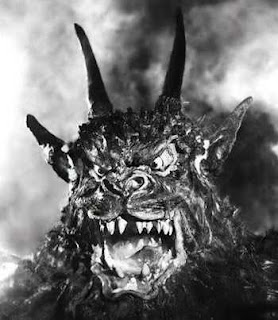 Also on level seven, not far from the Pit, was the chamber that served as the rumpus room for one of each type of demon from I to VI. According to the Monster Manual that mix is a legit possibility when encountering demons. I don't particularly like running demons because of all their fiddly special abilities, but I wanted to see the players react to such a grouping. Across the hall was an enclave of mind flayers driven mad by the White Stone. That's right insane mind flayers.

It was scouting level seven that convinced the players it was time for the campaign to shift focus to wilderness exploration and stronghold-building.

As I noted in my comment, the other option on that level was an Ancient Red Dragon, whose son Grunty was wearing. I paid her Gynosphinx secretary 8,000gp to forget we were there.

I challenge any other group to respond positively to the offer of Insane Mind Posse/ Gathering of the Demon-os, with Big Red in the Fresh-Ass Comedy Tent. Also, free shovels.