Wherein I keep putting off work

Midpoint of Spring Break already? Just got back from the Illinois State Museum's Alaskan photography exhibit with granddad, which makes an unprecedented two days on the road, only exceeded by our tour of the 1993 flooding. (Hey, I had to blow off steam after senior year. And the last one was in 1927, so shout out to Big C.) Interestingly, Felecia has a giant Lincoln themed sculpture on the way into the museum, so I don't feel so bad about missing her show opening a couple weeks back. (Well, I still feel bad no-one gave a shit about what I wanted, which was to go to her show.)

Speaking of things no-one else cares about, GI Joes. I finally broke down and picked up James Barney, from the Target glider set (Read the file card, and figure out why I empathize enough with the guy to address him by name.) This makes a full run of 82-83 figures in 25th/Modern Era form for me, and the last few 84s I need are commercially available. A few customs are fairly simple (Tan glider pilot Grunt is a headswapped UBP Steeler, with different web gear, for example), but I'll talk about a couple more complex ones. 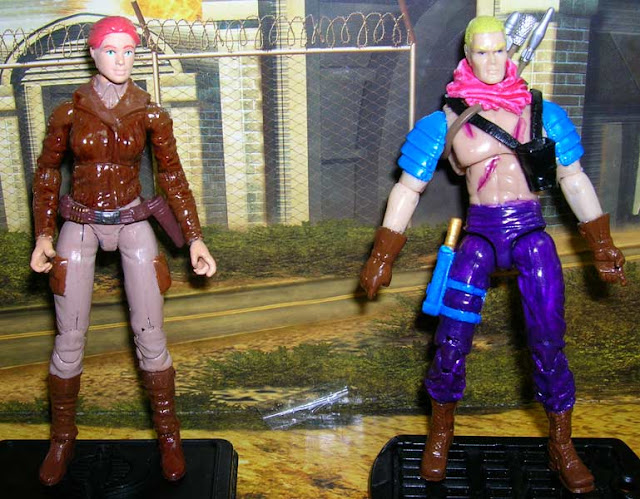 On the left, my Cover Girl.  I've seen a lot of customs use a Lady Jaye body (mostly due to Scarlett's legs being a pain to remove, and being of different construction, I'd imagine.), mostly with an Indiana Jones jacket (or the comic pack Cover Girl jacket) and Hawk sleeves. I'd see a few variations (fur trim on the boots, f'r example), but it seems out of character to make a custom figure that looks like everyone else s version (not saying I haven't or won't, but seeing the same recipe every time is irksome.) I went with a repainted PP Baroness top and arms, Lady Jaye upper legs and belt holster, and Cover Girl boots. (I don't mind Ripcord Wayans, but bad-ass tank driving Cover Girl being a paper-shaker that gets about a minute of screen time before getting shanked by Zartan? That pisses me off.) And topping her off, Pilot Scarlett (nee Glenda with red hair) head. So, basically I made her from every other woman in the GI Joe line. Bride of Frankenjoe, if you will.

On the right, Zandar. Honestly, we haven't seen a Zarana (4 versions) yet, so the chance of Zandar (1 version) is less than zero. Remember how I was complaining about recipes? Well, everybody in Swiss Family Zartan has those armored shoulder pieces, so no escaping that.  I did pick up Arctic Assault Storm Shadow, aiming to use his neck scarf, and he ended up being the first torso I've cracked, swapping the Zartan arms onto his scarred torso (and the neck wasn't long enough on Zartan, so there's that, too). The upper legs are Tunnel Rat, and the lowers are standard greenshirt joes (I think a spare Breaker).

So why is Zandar more flamboyant than usual? Simple, I used the Order of Battle illo to work from. I think it's hilarious that a guy whose super-power is no-one notices him to be decked out like a 64 color Crayola box melted on the Road Warrior. 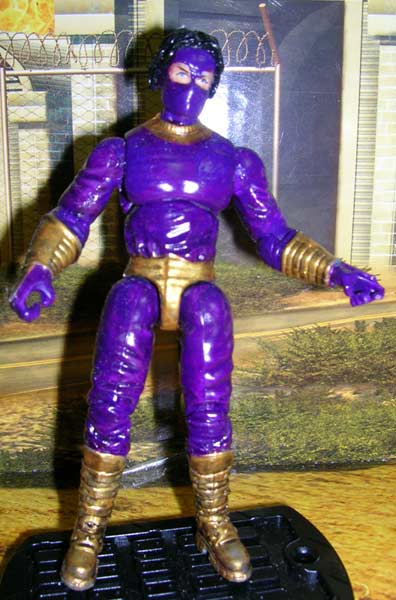 Superninja here is from Chuck Norris's Karate Kommandos, and is made from a greenshirt Joe, Storm Shadow head (with Doctor hair), Destro arms, and Neoviper legs. I made him because, hey, Superninja.

And yes, I used the gold from the Black Super Ninja with the Purple from regular Super Ninja.