A while back I picked up a Storm Shadow (v33), to check out his legs. More to the point, to compare them to standard Snow Job legs, since I was thinking of turning a Barbeque into a Sonic Fighters Lamphrey.  Thanks to yojoe, I know a 25th Lamphrey is an Alpine chest (cannot have), with Snow Job arms and legs. Once I had Storm Shadow, though, I had a thought.

I had seen some 25th Tele-Viper customs where the lower legs were switched out for Snow Job lowers, to make it look closer to the jumpsuits of the original Tele-Vipers. I still wasn't too happy, since the 25th has Viper bracers, instead of bare arms. So I took a Cobra disguise Flint, added Breaker upper legs from training Ripcord (I have a couple Rescue Mission Dukes slated for this too), and the Storm Shadow lowers. The fellow on the left is the base for a Python Patrol Tele-Viper (Tiger Force Flint, with Dusty/Pit Commando legs), who I've been jonesing for since seeing the thread on Joeintel. I had originally slated Res. Gung-Ho for the job, but couldn't find any spares around here. (While I didn't have any cash, I could find piles of them. Once I had money, there was just dust left.) I'm waiting to recover my will to paint yellow (I'll probably try a rattlecan this time), and experiment with masking for the stripes. 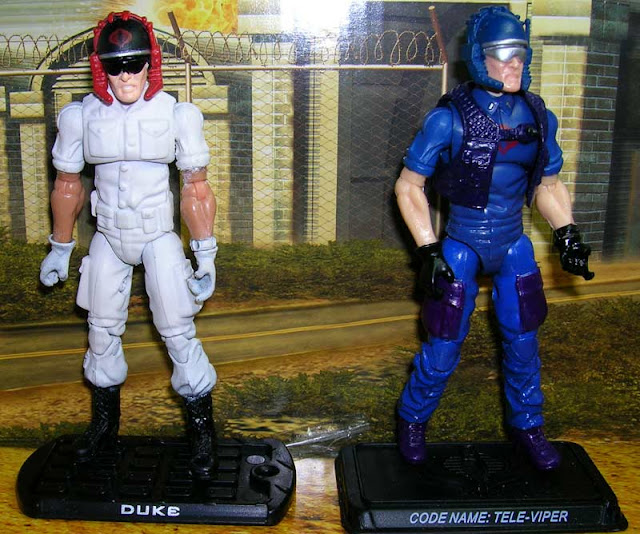 Maybe excrement is more accurate than experiment. After a good priming, I laid down a coat of Haze Grey, cut tape for masking, and spayed a coat of German Grey. Now, I don't know if it was the ambient temperature (50F), but there was some bleed from the German Grey. Which meant I had to hand brush to trim out the stripes, which is what I was trying to avoid. 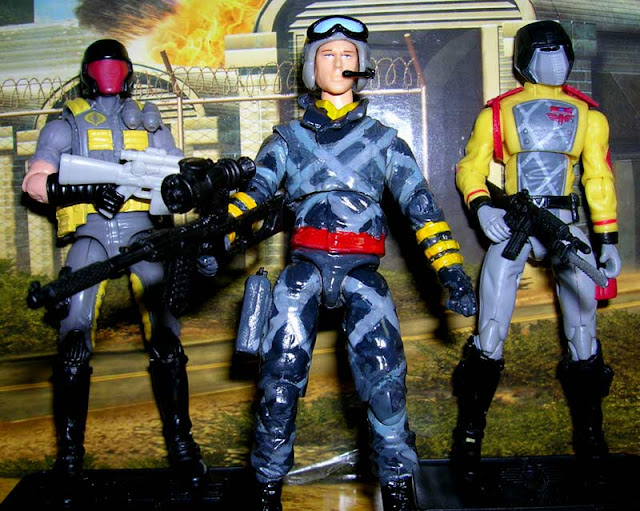 I'm aiming for Relampago, the Forca Naja (Python Patrol) Motorcyclist-Sniper, a Brazilian repaint of Ripcord. Back to that Storm Shadow, one of the comments I've read online was "What's up with the motorcycle jacket?". Well, recalling that Relampago is the "Naja Motociclista" (He shares a name with Zapata's white horse, after all, so I've got to get him a white motorcycle at some point.), I thought motorcycle jacket was exactly right for him.

He's made of the aforementioned v33 Storm Shadow, lower legs from RM Duke, a "Chatum" Duke head, and a helmet from Rollbar. Rollbar, might well become Gatilho at some point, since I'll need a Python Gunman, too.