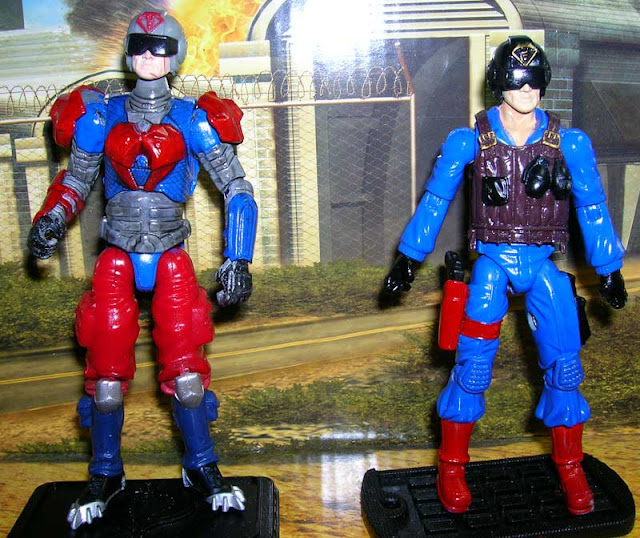 I've still been working through my to-do list, but took an aside to make two Scrap-Irons. It's not quite as ridiculous as it sounds. I picked up RoC Scrap-Iron and the Ferret awhile back, and didn't mind the odd Cobra Trooper limbs on Viper torso recipe, until I saw the unreleased Wave 16 Scrap Iron. Unreleased Scrap Iron used a Shipwreck torso and Airborne limbs, gave him a holster instead of a knife (Scrap-Iron doesn't seem like an up-close and personal guy), better sleeves, and a more disco collar, closer to his card art (and he originally used Airborne arms and lower legs anyway). Technically, I used Spirit's torso, and Rollbar's limbs, but hey.

Now when I saw the Accelerator suits, the first thing I thought was DTC Scrap-iron (I blame the shoulder armor.) Mine is the top half of a Accelerator Ripcord, with Resolute comic Destro legs.

Now what's up with the title? Scrap-Iron is a mercenary jerk who switched allegiance from Cobra Commander and Serpentor, all the while purportedly working for Destro. And yes, even by Cobra standards he was a jerk: 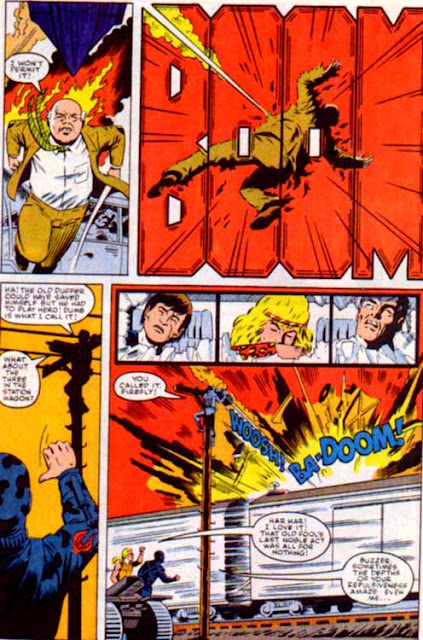 Now wait, you ask, how do you get better from an Anti-Tank round? Larry Hama, that's why. See, as the franchise continued, the characters got more complex. Tooling around with Destro, Cobra Commander finds out that Billy survived being used as a pawn by the Baroness and Major Bludd, fleeing to train with Storm Shadow and Jinx, and tearfully decides to quit Cobra and become a better father. Which gets him a bullet in the back from Fred VII, then he gets better, and buries everyone who betrayed him alive. Eventually, nearly everybody goes through a change, as Storm Shadow comes back to life in Dr. Mindbender's clone tank, and forgives Snake-Eyes, Baroness learns Snake-Eyes didn't kill her father, and gives up terrorism, Destro gets tired of Cobra Commander's shit ("What's a firefight between old friends?") and Zartan shanks the Blind Master, and re-evaluates his life (stabbing an old blind ninja in an alleyway is far from the worst thing Zartan's done, but whatever.) 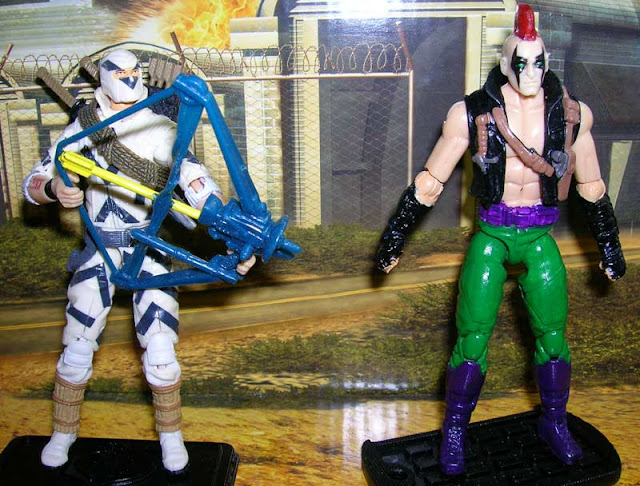 Leading up to working-with-GI-Joe Storm Shadow, and Ninja Force Zartan. I know there's already a Storm Shadow 88' in the modern era, but it doesn't have the rolled up sleeves and leg guards, and I do have the original, so I know it had different leg guards, but hey comic books: 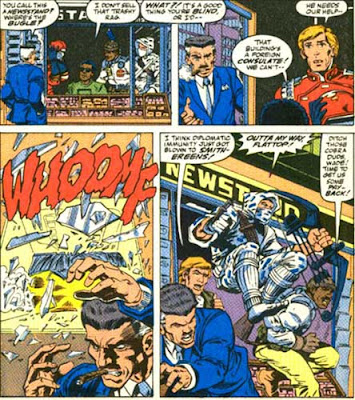 Yep, that's some sort of ninja-fasces flying past J. Jonah Jameson's head. I can't find any sort of documentation of ninjas having bundles of sticks (bamboo?) wrapped around their legs, but I'm fairly sure the Arishikage death-trance isn't real either. Anyway, good-guy Storm Shadow uses the body of Arctic Threat Storm Shadow, with the lower arms and legs of Devil's Due SS, with version 25's bow, and the Red Ninja leader's rope and quivers.

Why would I call him happy? Well just look at him: 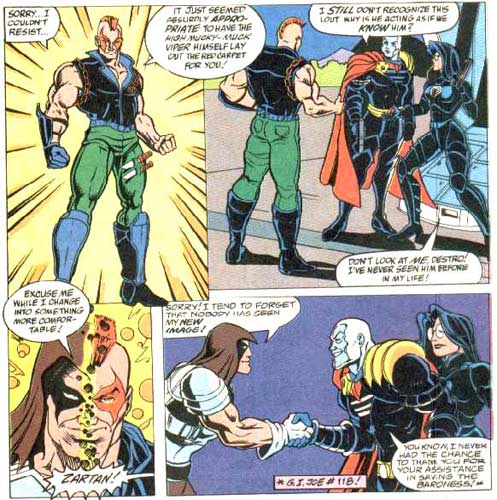 Oh yeah, Dr. Mindbender put post-hypnotic loyalty commands ("morality overrides") triggered by Cobra Commander's unmasked face. Which results in Destro and Zartan hunting the Baroness and Billy through Silent Castle, and destroying Darklonia with an ICBM. I told you, Cobra Commander got better.


(I still can't believe people object to the newest re-boot starting from this continuity, instead of Cobra takes over Hawaii, the Red Shadows, or some of the other bizarre continuities. And yes, I consider the G1/G2 Transformers crossovers less bizarre than the continuity where Unicron teamed up with Cobra-La...)