I still do stuff

Thanks to morticoccus, I didn't do much between Halloween and MLK day (when I got my clean bill of health), so cabin fever didn't really set in until recently. Last weekend, in place of Winter War, I put together the parts for some GI Joe customs, and been painting, coating, and screwing-up for the last week. 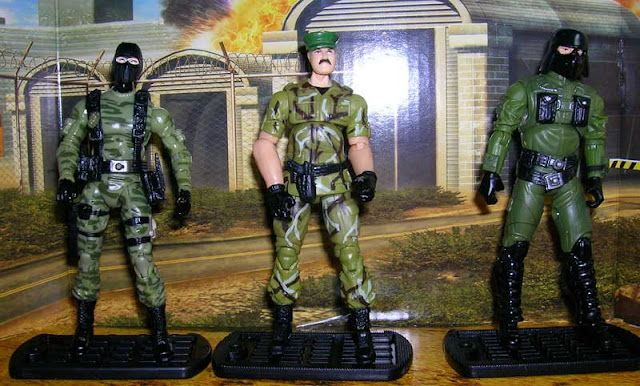 First up, Haiku squadron. (Terrordrome uses Haiku to describe simple part swaps, HISStank uses LBC, for "Lazy Bastard Custom", while being a lazy bastard, I try not to admit it.) Nunchuck is a MARS Trooper head, and painting Stalker's skin black. I'm hoping the Dusty re-issue makes it into production, since I'd like to use a Dusty helmet for his head scarf. In a pinch, I can use the CP Storm Shadow Shredder hood. Leatherneck is a RoC Gung-Ho head on a TRU PIT Commando body, and will have a Mutt vest eventually. Night-Viper uses a SRO Ace body, HISS driver lower legs, with a MARS trooper head and helmet. I'm not sure whether to go with a night vision monocle, or tactical Snake-Eyes goggles. 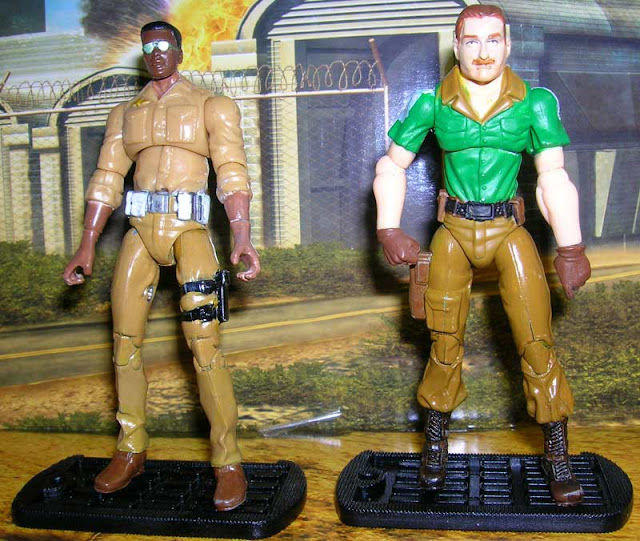 Doc started when I found the Arctic Threat Doc (neither of my two entries into the Save Doc campaign worked, and I'm not hot enough on Doc to pay $40-70 for him.), so I used a Comic Pack Duke (ironic, since I only bought it for the Doc points) with Cobra Commander legs. Crankcase, I missed out on,  (when given the chance to buy another HISS tank, or an Awe Striker, I naturally chose HISS tank) and I went with the production recipe of Breaker head and Shipwreck torso, but I went with Duke legs instead of Cobra trooper legs, since he had a holster, not a knife (or kneepads, for that matter.) Also, that Breaker head might lead to a future Magnum PI custom. 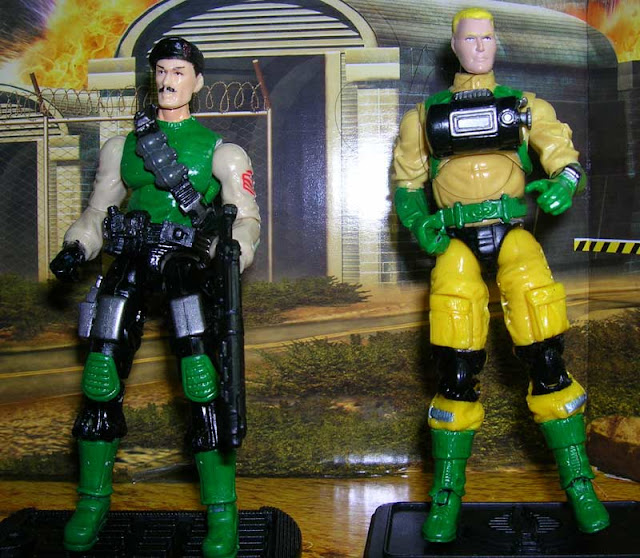 Dialtone (Touchtone? Ringtone? Like Mainframe, he sounds like a dinosaur.) went together really well, an Airborne body, with TRU Barbeque upper legs and a spare Flint head, and TRU Snake-eyes webgear. Airtight finally came together after getting TRU Doc. Once I saw his legs, I thought of Airtight, and put the legs on TRU Barbecue's body. Might go back and repaint the torso, and still have to decide on a helmet. I'm thinking Res Duke's helmet, but having seen how well Copperhead's head worked in a custom thread, I might give it a shot. 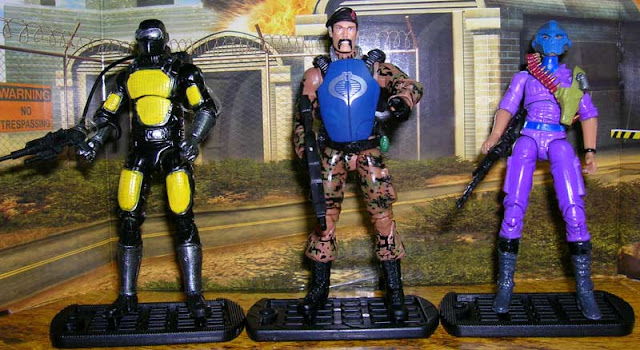 Cobra de Aco is a Snake-Eyes head on a Tripwire body. Cobra de Aco ("Iron Cobra") is a repaint from the Brazilian GI Joe series (like all laser troopers, he has sporty quilted armor). Major Bludd needs an eye-patch, and I'm thinking of dyeing his chestplate (the tampo should be dye-resistant). I saw someone use the Jungle Ripcord with a Major Bludd head, and while I was managing my parts box, I saw the GI Joe pack #2 Flint head (Why the long face?), and thought it might work instead of the not-quite-right open mouths of the 25th Major Bludd headsculpts.  I love the never explained cyborg arm, but in reading up on him, no other version had it. So I suppose it would be my RoC/PoC Major Bludd. Not Resolute, since he still has his heart (Kali Ma! Kali Ma!) Evy uses a Cover Girl body and head, with Range Viper mask and RoC Tunnel Rat's holster.
Wait? Who's Evy? She's a Range Viper from the DIC GI Joe cartoon, and I haven't seen any customs of her, despite many calls that there needs to be a figure of her. See what a team player she is:
She has some baggage:

And she's the nemesis/best friend of GI Joe Ambush: