I think I broke something

So I just woke up from the second dream in as many weeks. I had been pretty good about not having them, but one got through last week.

It involved sort of a Kirby-esque children's program called "Electri-City", set in the eponymous Electri City. The children's roles were as "Rangers" sort of wandering do-gooders in vaguely olive drab Cub Scout uniforms, opposing costumed villainy. The villain of this piece had a sort of gauzy, baggy hood over his head, made from the material my old astronaut's gloves are made from. I remember it clearly enough to sketch it a week later: 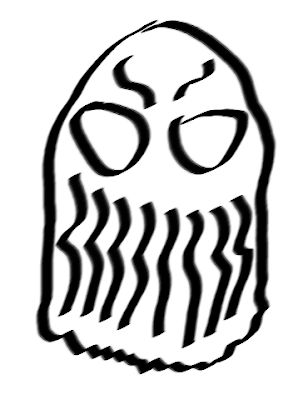 The dream also included a copy of the Ranger's manual, one part that stuck was a notice that a Ranger cannot serve more than a four-year hitch, (I guess sort of a leaving childish things behind concept? a subscription?) and in the back of the manual were various projects, including the wiring schematic to a listening device labeled "The Legion of Doom's Snooper". In retrospect, it seems odd to give kids access to the enemies' tech, but maybe that's my relative morality showing through.

Tonight's adventure involved a group of manga style villains who had broken out of a parallel storyline (I could identify it as vaguely in the style of Go Nagai, who engages in Moorcockian storytelling), who were traveling to just before the end of another story, hoping to make the hero suffer by making the end come out worse than it was meant to. I was enlisted to stop them, since I was from a higher reality (or even from "reality", I guess), I would be more powerful, meta-textually, than some-one from an equivalent reality. I awoke as I was being purified in a jeweled bath. So, Go Nagai's The Filth, I guess. I feel like I've discovered the truth about Dr. Stinger and Dr. Cohen, now.

Edit: For anyone wondering why I keep the Onomancer link around:
(Answer? I don't know either.)