In which I increasingly become an Unknown Armies character... 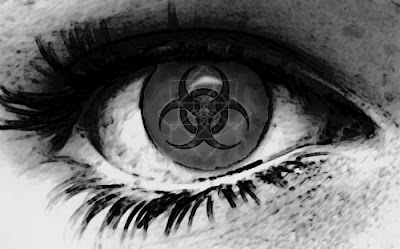 VTI, or visually transmitted infection, is a weaponized version of information transfer developed by the group calling itself Cell 144. Through both specifically designed images and engineered text Cell 144 have been introducing an organism into the populace. Each day this infection spreads more widely as the organism better learns to mimic memetic propagation. The organism is described by Cell 144 as "..the hyperdimensional analog to the prokaryotic organisms which gave rise to our mitochondria."1 Infected individuals begin to develop new hyperdimensional structures, a process which may lead to any or all of the following:
Increased luck.
General Confusion.
Increased awareness and limited control over time's nonlinear functions.
Gnosis.
Loss of specific memories and/or the sudden realization of seemingly altered or completely new memories.
Occasional blackouts accompanied by the sensation of missing time.
As the hyperdimensional structures develop infected individuals report a decrease in their earlier unease. Many victims also reported bouts of euphoria. A desire to confront past traumas and proactively address problematic decisions and behaviors is not uncommon. This process has been described as "...following your pain...", and "Killing off the parts that aren't really you".2 Infected individuals eventually report conscious awareness of a symbiotic relationship with the developing organism. This sense of symbiosis tends to lead to an increased desire to cooperate/co-create, especially with other infected individuals. Anti-authoritarian sentiment begins to increases as the facade of hierarchical authoritarian structure's inevitability, desirability, and practicality becomes increasingly transparent.
This PSA is brought to you by Cell 144 and Tesseract Technologies who would like to remind you that you have just been targeted by a VTI attack. Congratulations! You are on your way to becoming both an engine of the destruction of our current diseased reality and an engineer of the New Eden which will replace it.
Interested in helping our efforts?
Please forward this VTI document anywhere you see fit, or for more information concerning our ongoing efforts please consult:
flowerofkairos.com
foolishpeople.com
1.Building The Engines Of Kairos (1993)
2.Weaponized Art: The Case For Apocalyptic And Morphogenic Artistic Interventionism (2011)